​Valigia Avvolgente wants to critique Peter Kivy's notion that the existence of notation available to mental sounds means that the composer does not need instruments in order to compose music:

So powerful is this notation, and so much a surrogate for that which it notates – that is, the work of music itself – that there is a strong temptation to reify the notation and mistake it for the music, […] Be that as it may, once a notation pops in between the composer and his medium, the medium is no longer the transparent thing that it was (and remains) in the world of improvised music. It becomes rather, a problematic concept to be scrutinized with the philosopher’s eye.12

He sees the relationship of the improviser to their material as so transparent that this relationship does not need scrutinizing. While the material of the composer, ‘the nondimensional medium of music, that is to say, sound’,13 and its relationship to the score and the mind, does need to be scrutinized.

By making music a dimensional medium my Valigia Avvolgente turns the actions done with an instrument opaque. While the sounding objects are hidden from view, what is presented are the cut outs of memories which an exscribe memories from the context of making the instrument, in this case the three destroyed cities in Sicily, Gibellina, Salaparuta, and Poggioreale. The shape of the appearance is made to draw in the attention of the musician and asks them to touch specific places on the instrument, these places then set to motion a feeling, which can be acted on. 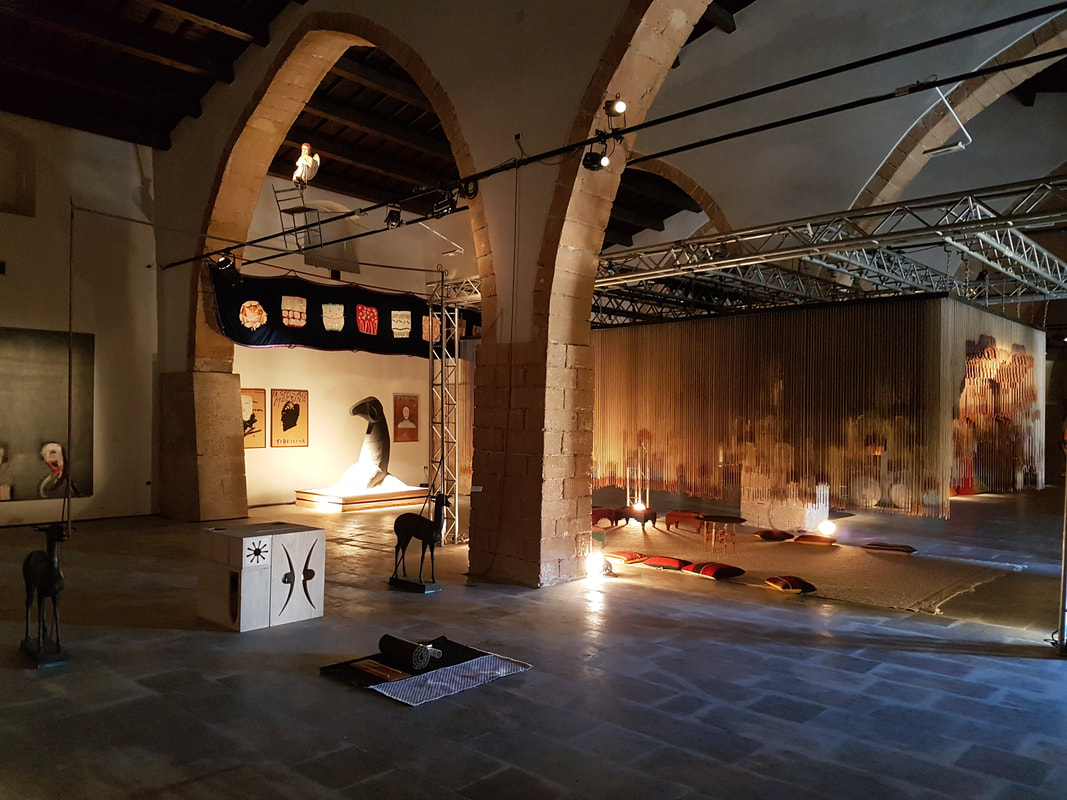 ​Valigia Avvolgente in the Museo Dell Trame Mediterranee at the residence of Fondazioni Orestiadi. The composed musical instrument consist of hollow musical bodies filled with a musical identity not necessarily characterized by their volumetric acoustics. Rather than being concerned with the materials being used Valigia Avvolgente takes the idea of coming together in a recognizable union away from a specific landscape and maps as one to one as possible its memories onto the skins of the instruments. Intuitions played a strong role in working with the symbolism in the work while interrogating the question what does touch sound like, I was forced to recast my question as how can I bring the audience close enough to touch the instrument? 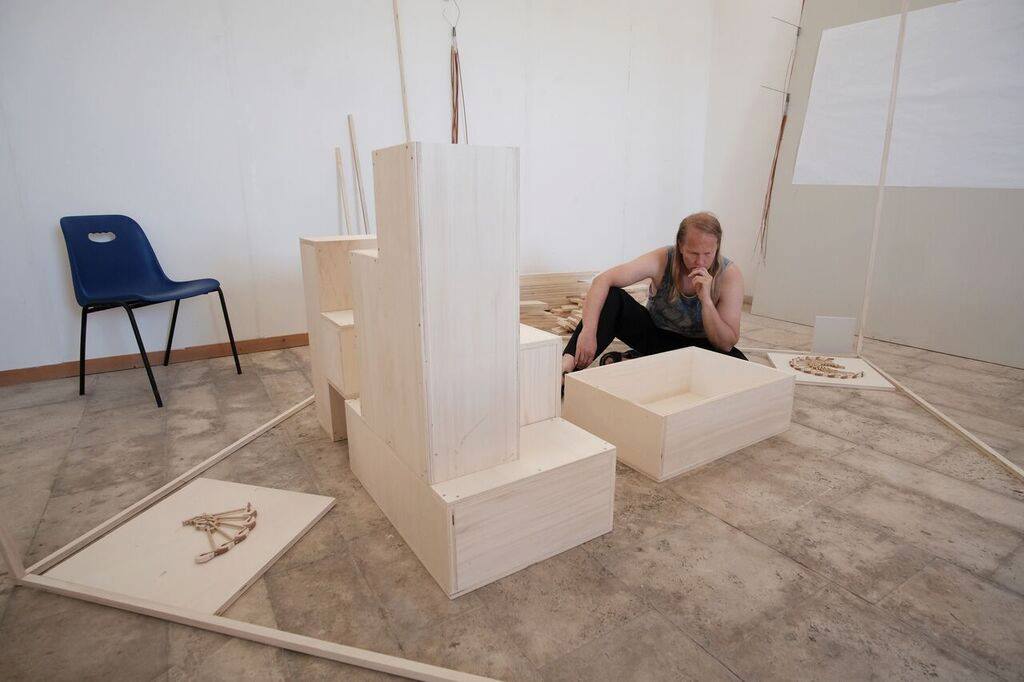 What I think Aaron Einbond argues through his work is that instruments where the sound source is not seen, and he is arguing through an analogy with a scene where the singers, who's instrument is their voice, are physically absent from view, and that tese are signals to echoes and to absences. Einbond uses this as a critique of embodiment that has been 'dominated by more literal interpretations of touch.' (Einbond, 2019) I wanted my Valigia Avvolgente to also take on these more totemic features of touch that signal to an absence of a body touching, a void which the audience feel drawn to fill. 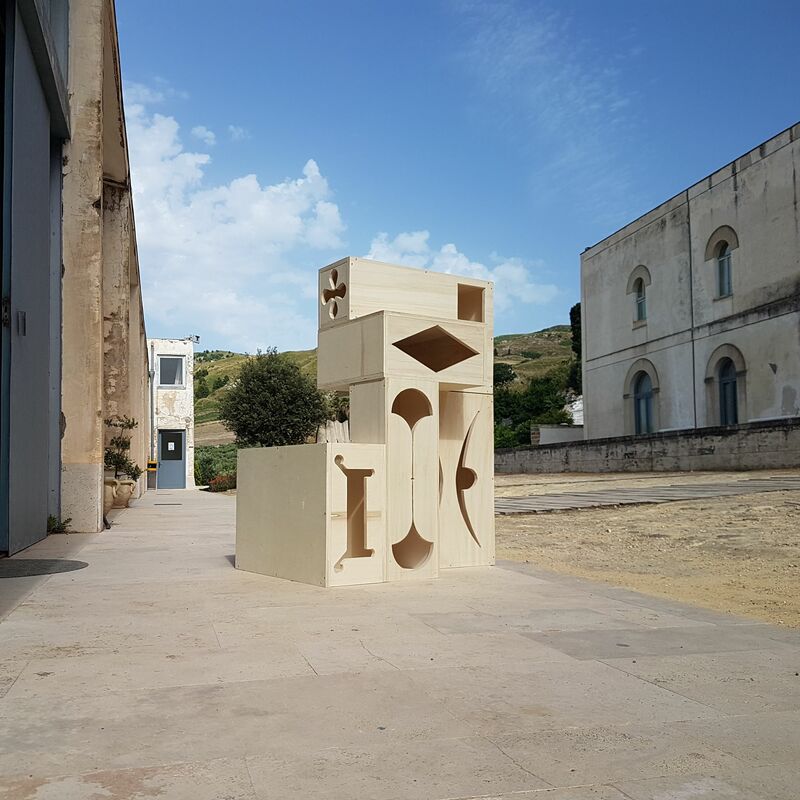 The idea of Valigia Avvolgente emerged as the conclusive synthesis of a comparative analysis I made between what I felt and listened while my hands were happening to work on in sounds and touches. The body of work that emerges from the research problematizes academic presentation practices in that my composition aesthetic includes the domain of touching beyond its acoustic linguistics and verbal syntax. Therefore every instance of the work must include touch on the singular composed musical instrument. The fidelity of an experience is reduced because of description and documentation which inscribes the work. In order to find a symbolic touch which was not literal I began by constructing a miniature. 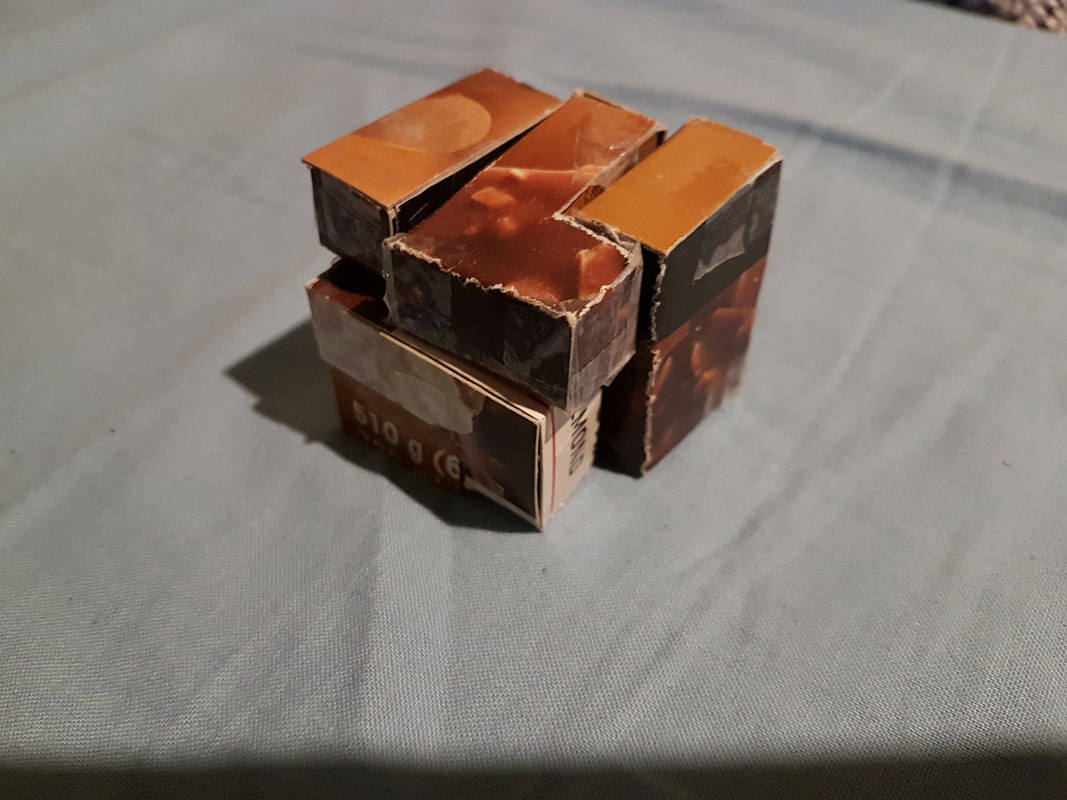 What was important was that each of the five shapes should be different but that their total sum would form a cube. Due to time constraints, I chose the first solution I invented to this topological problem which had only two shapes which were the same size but which nevertheless felt approachable in terms of technical fabrication. The method that was discovered useful during my other composition Heel I describe as tactile abstraction, and is contrary to the rest of the process primarily concerned with material properties. 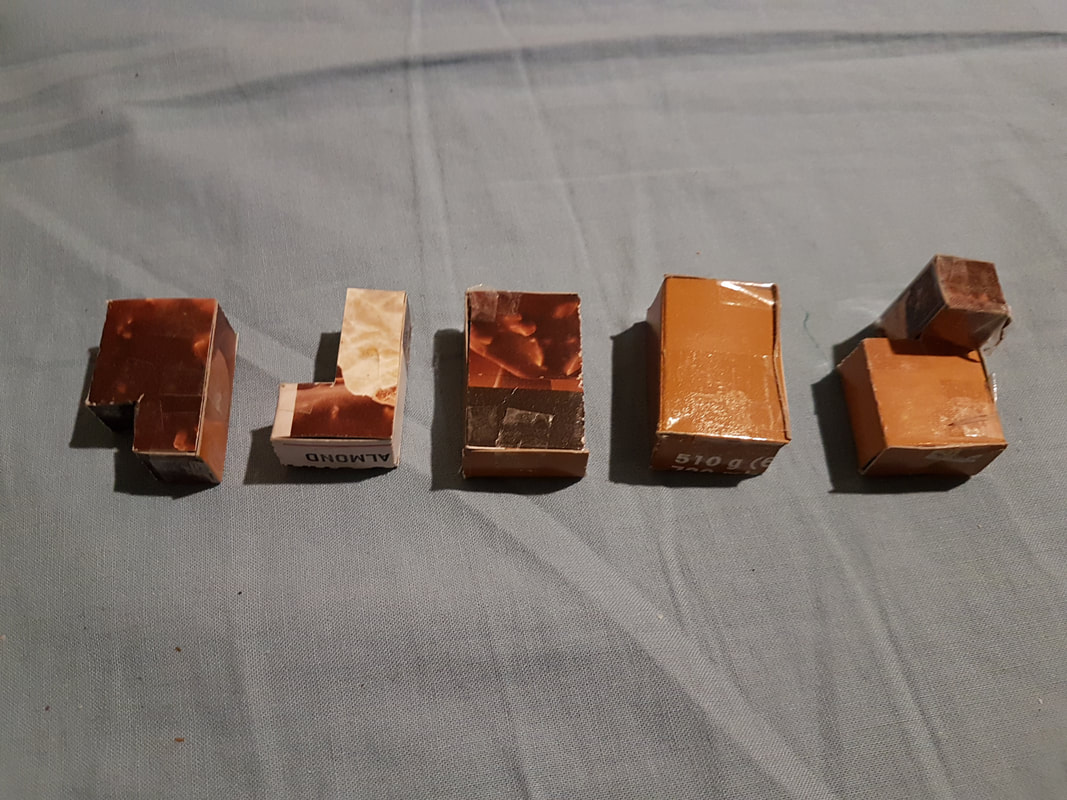 The first miniature on the other hand is constructed from cardboard and fabricating the pieces I made sure to be as efficient as possible with my materials. Crossing from cardboard to wood I then made the mistake of miscalculating the sides of the wooden pieces to have an interior measure of 20 cm. This material concern led to the extensions, or parts, of Valigia Avvolgente, which further abstract that concept.
Even with this miniature, when I got to the studio I felt like I needed to explore more the idea of what it means for a shape to wrap around something, in order to exercise through this line of thought I began drawing shapes which imagined in reverse perspective how differently shaped blocks interact within the total shape of the cube.
Visualizing in this way the interior of the instrument I began answering the question that had bothered me since Heel. How would I communicate the relationship between music and touch and make the toucher not only understand that they are touching a score but that they their touching consists of the instance of the work that speaks about, in the case of Valigia Avvolgente social design methods and a historical period in Sicily when art drove a social change from an agrarian to urban society.
I argue that the work answers this question by a de-habituation process of the musicians touch and I decided to go back to my materials. Thinking this way the final work would be made with an exterior of cut plywood 1.8 cm thick and as I started work I felt that the resulting cube should not have a side deeper than 70 cm. 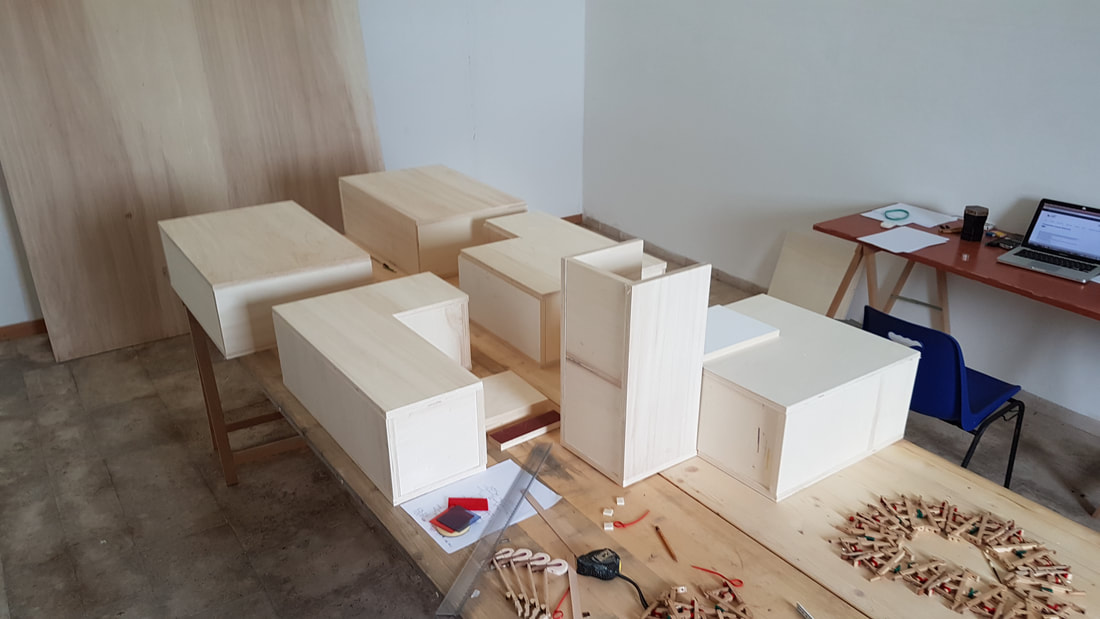 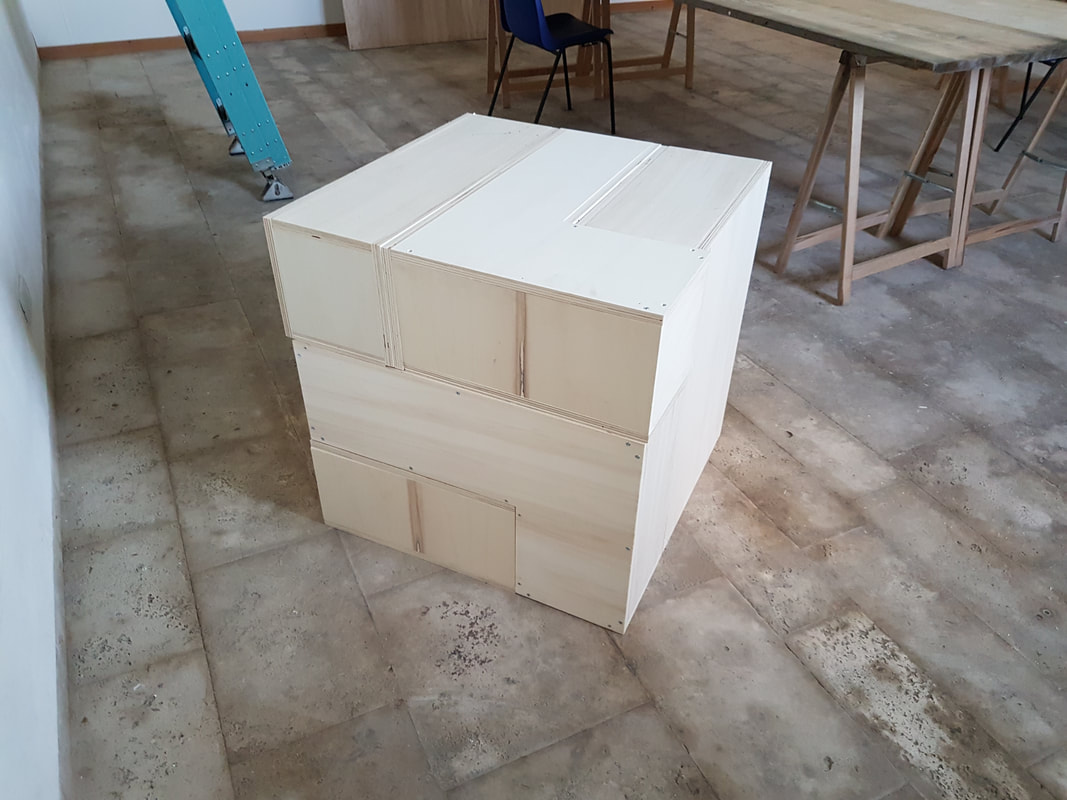 The totemic nature becomes evident in its morphing. 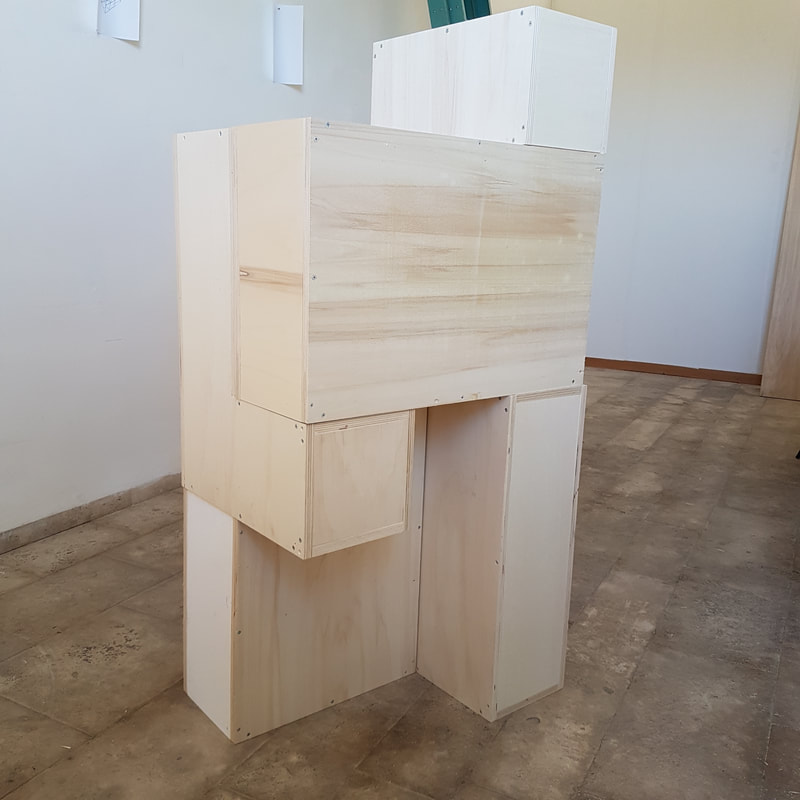 The material and organizational research into the objects that I had made and those which I have brought to the space started creating an idea of a larger space in which the objects lived and I started collecting shapes from the landscape I was inhabiting in New Gibellina which I knew would become the shapes of the wholes into the instruments. 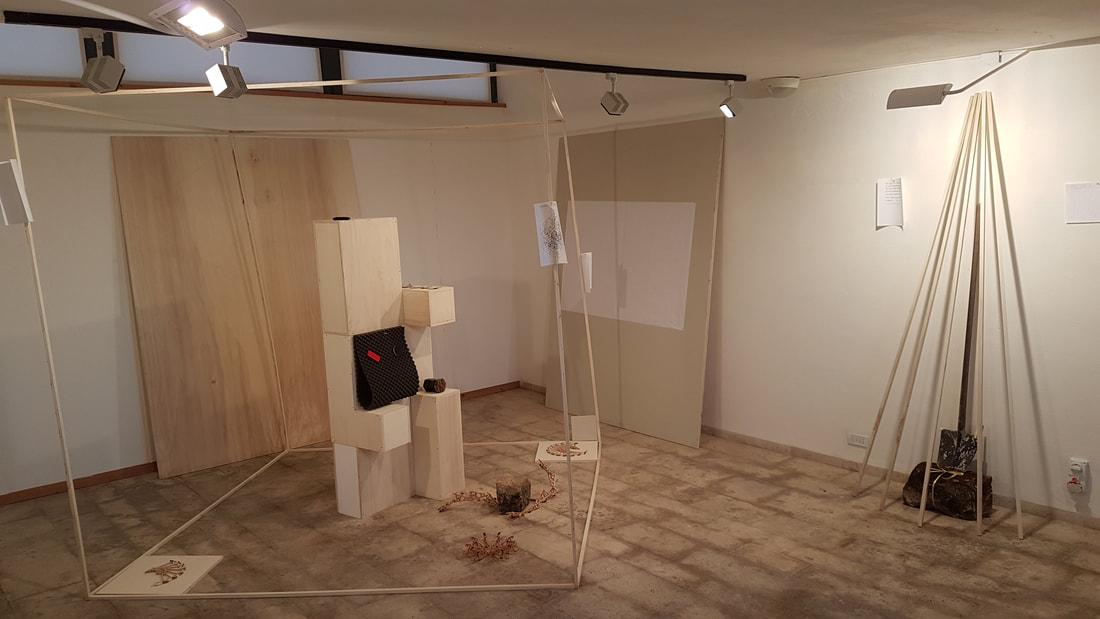 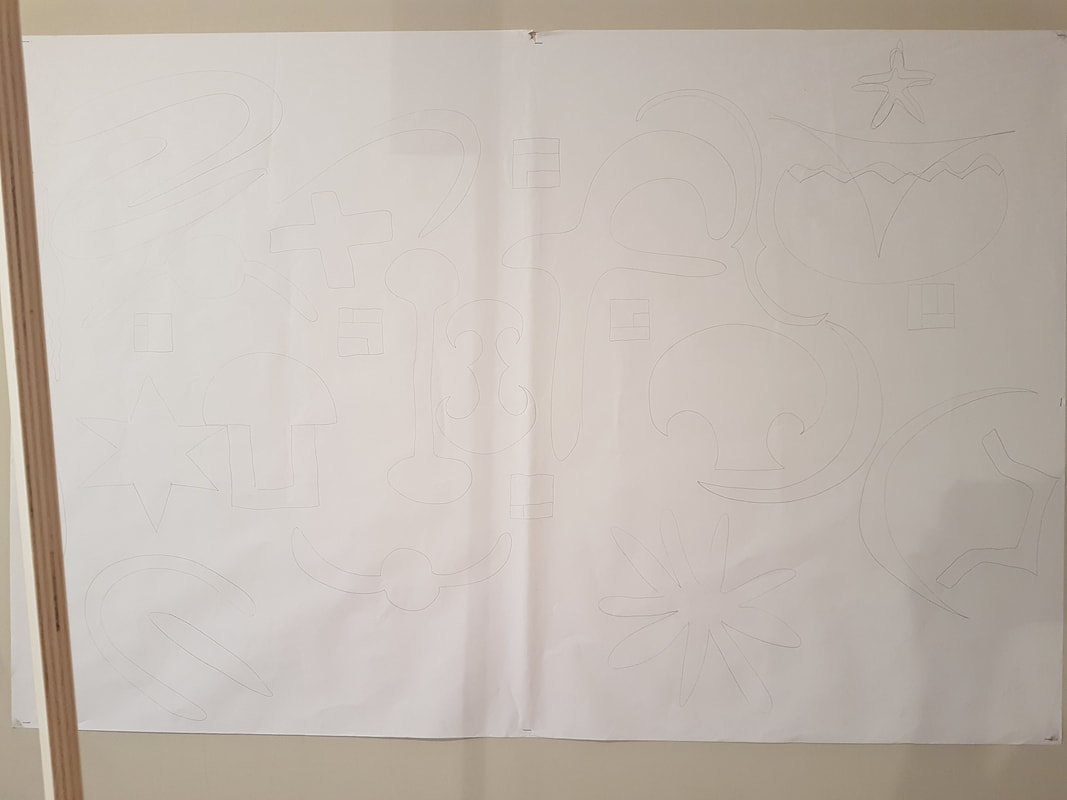 Part of the exercises I made in the landscape were adapted from Mark Paterson's Haptic Geographies where he talks about landscape in which the senses are. Rather than start by thinking what I am attracted to in a shape, I studied my landscape as a material archive of returning shapes, these chosen shapes always being holes within the landscape. Decorative fences, an oval water basin, rusted steel planting equipment, a bent out metal shoe scraper next to the entrance to a destroyed building in on the promenade of an abandoned city. Visiting Poggioreale I noticed how there was pure but destroyed Carrera marble in some places and I started collecting it with the intention of using it somehow inside the instruments back at my studio. These small pieces made me imagine big textural abstractions of the idea of coming together. 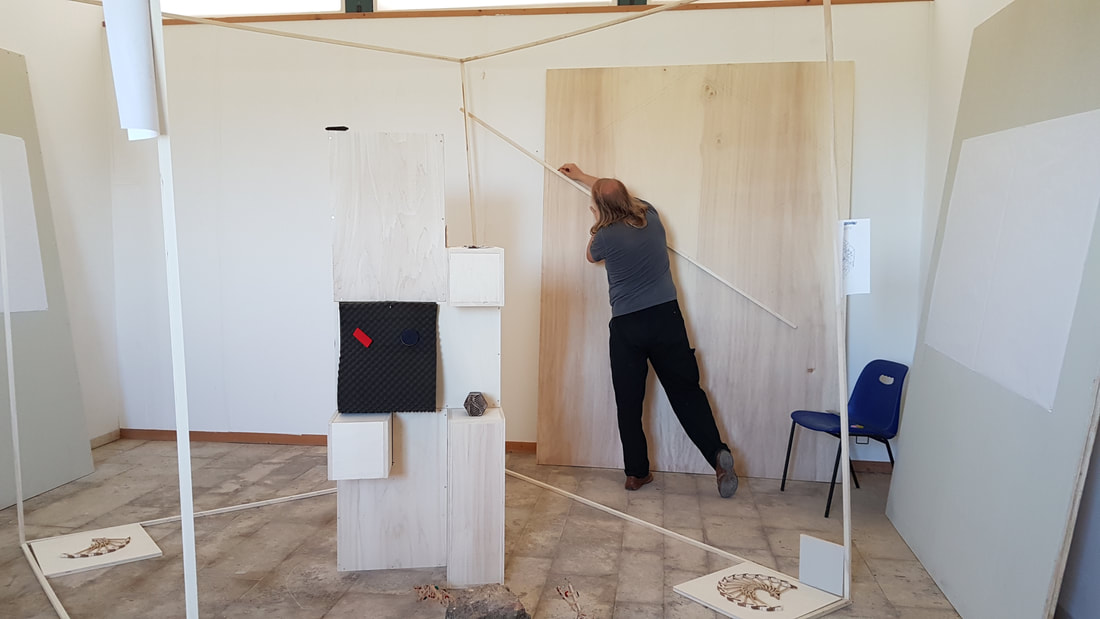 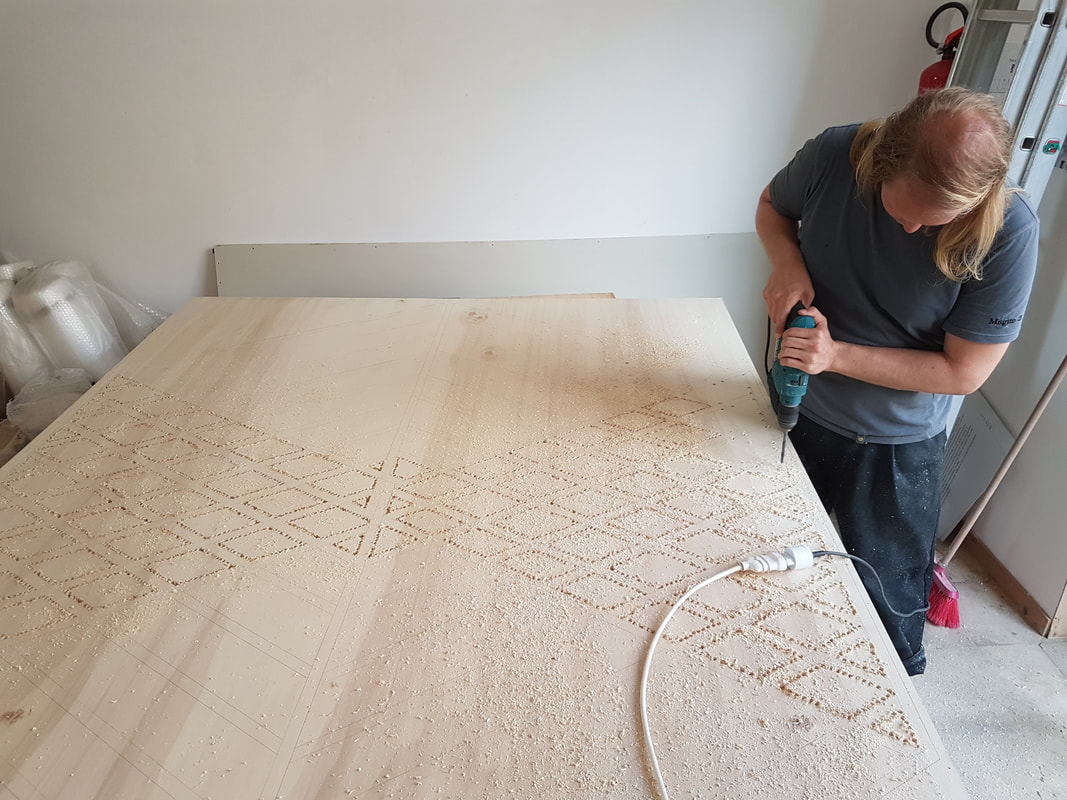 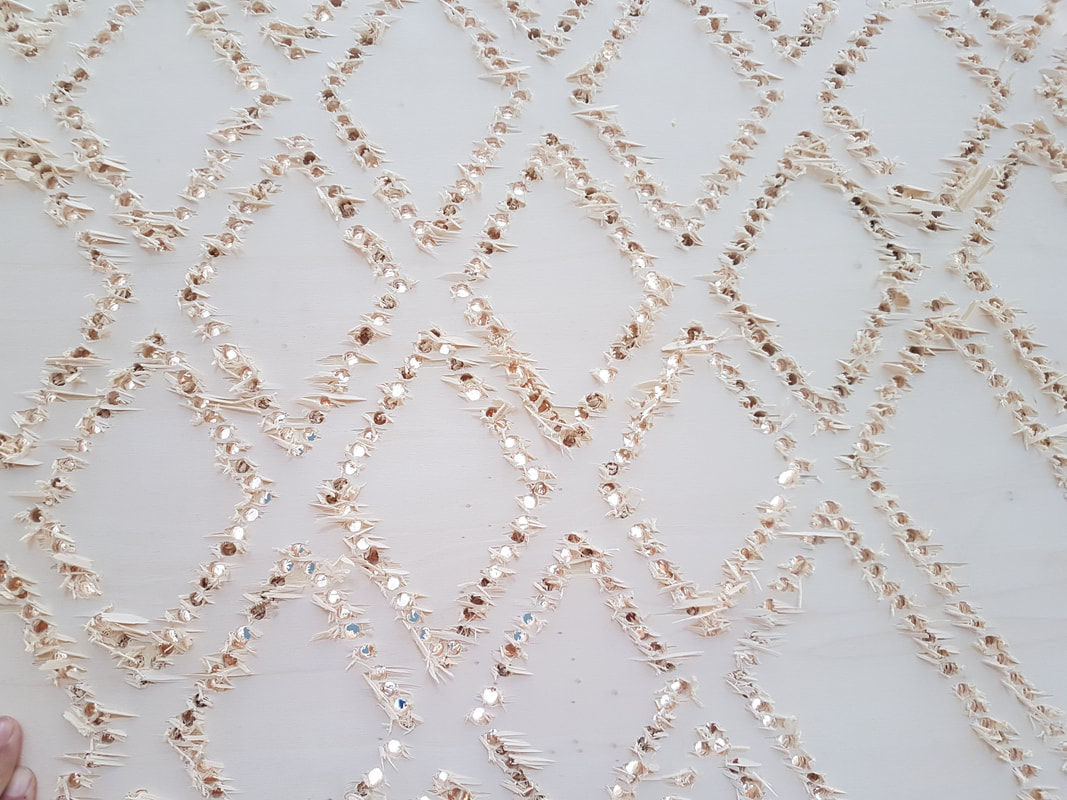 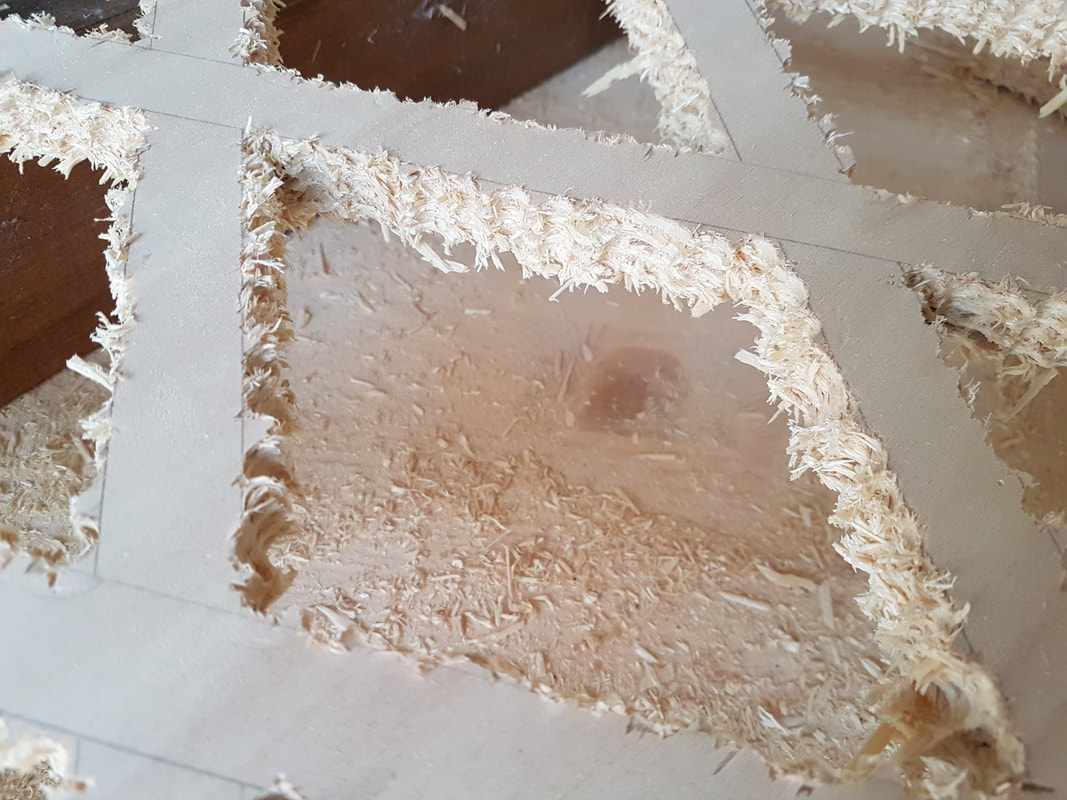 The resulting abstraction uses the cube as a sense perception rather than a physical volume, yet it brakes the illusion by producing two differently textured doors that are hinged together by metal wire.
In terms of the interior of the instrument, the tactile shape starts to take on various directions of sonic explorations. 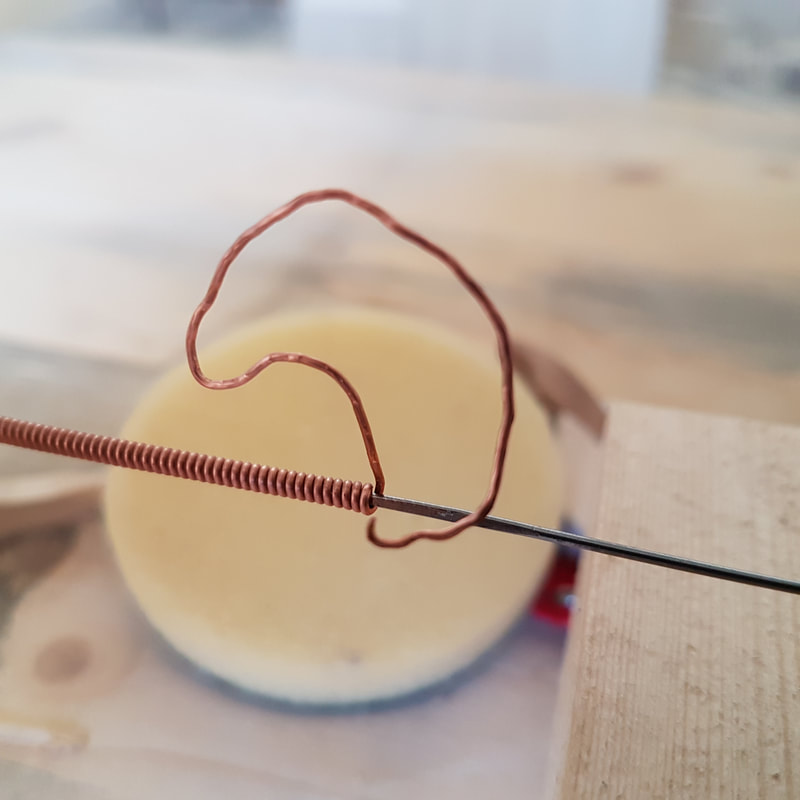 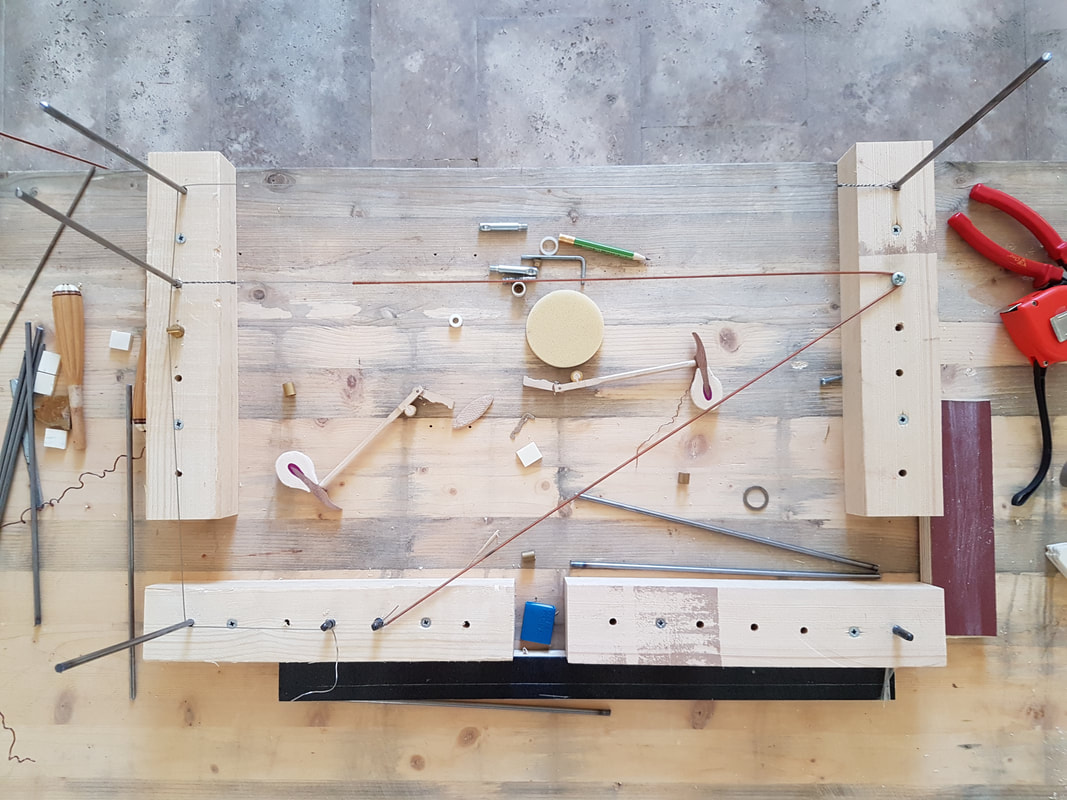 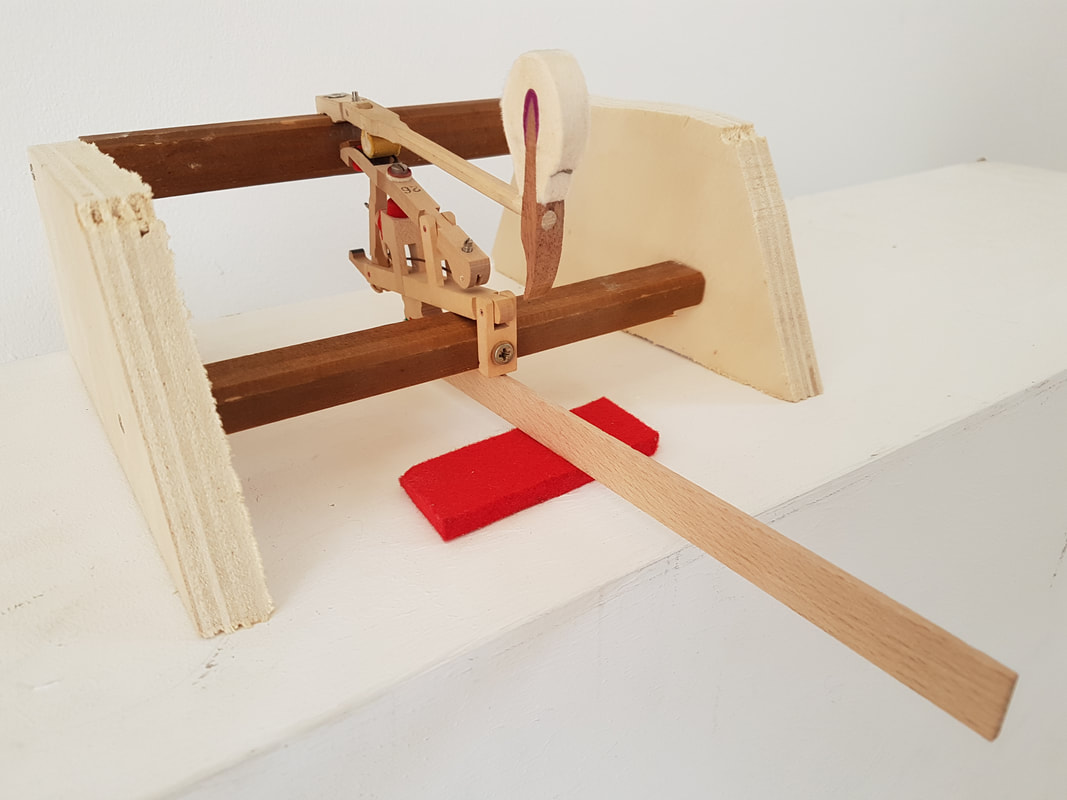 ​The space started to fill up and saturate. 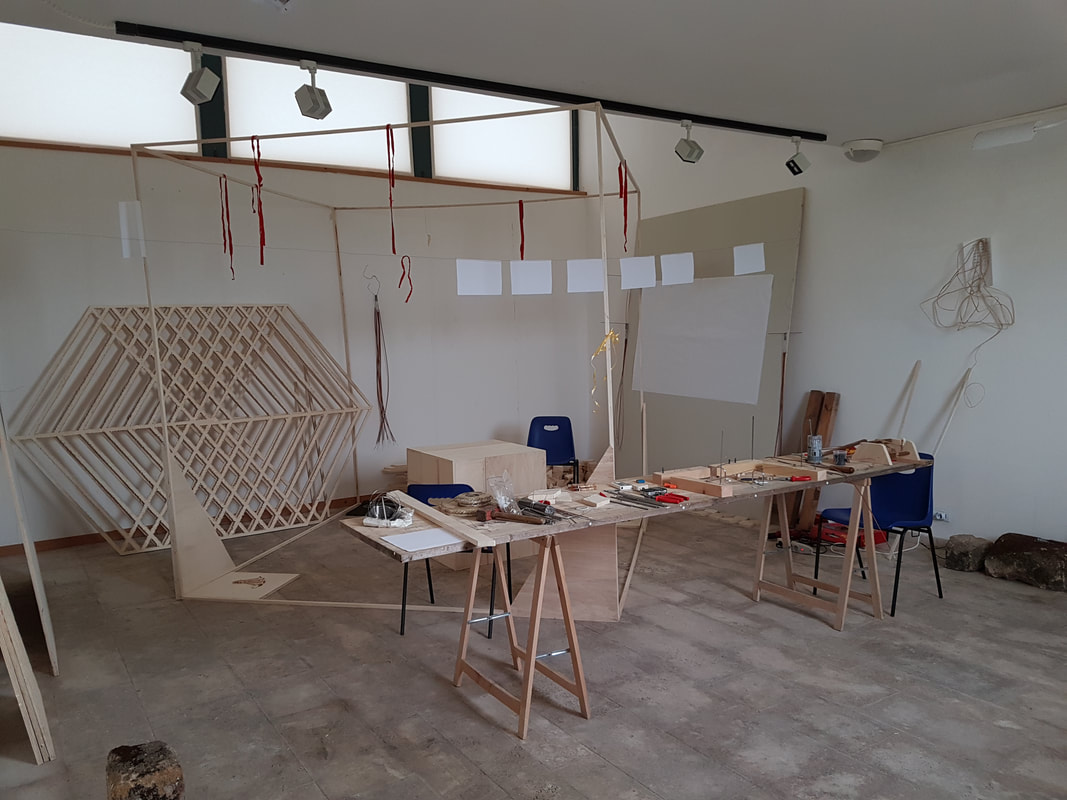 In saturating the space with symbols I am able to come to a decision for the shape of the holes.
​The final cuts before starting to work on the final sounding parts inside the instruments. Simultaneously the images show how I start to become interested in a particular route around the instrument.
​At this point, once I had finished working the edges of the holes and sanding the instruments I decided to take a step back and explore more the landscape. I felt like I had discovered the haptic-visual signs needed to bring the audience close to touch the instrument without asking, but I was still perplexed over how would the interior of the instrument would yield a recognizable pattern for touch only.

As I explored the landscape, both the rural hills and the urban spaces I felt more and more that while much of it was derelict and abandoned it was not empty. This feeling of a presence within the landscape led me to formulate a line of verse, which then turned into a melody used in the final performance of Valigia Avvolgente: 'Nel suone nel vuoto, non era la, mi guarda e ascolta, non era la.' In other words, 'the sound of emptiness is not here, I looked and and I listened, it is not here.' We, Antti Ahonen and I, further explored this lack of emptiness in the landscape by sleeping the night in the town square of the abandoned ghost town Poggioreale.

This piece interrogates the problem of a priori knowledge in touch and answers the problem of how to know one is touching a musical score. It is done by combining several senses in the pieces production, the sight or seeing touch is taken away, but what in fact happens is that the location of sight and touch is changed from the hand that makes the sound to other parts of the body. Touch is made invisible to the eyes as the hand enters the instrument, and this causes also the activation of other senses, for example to smell the instrument and its parts.

The piece writes in touch and touching by using different materials, iron, marble, wood, skin, felt, copper, and nylon. All these materials feel different but they also produce different touches by being tight or loose, and this must be discovered as there is no way of knowing it beforehand. Some of the sonic objects inside have a resonant reaction to touch, some a more mechanical one, some have textures, some force, by their arrangement the movement of the hand to become strange and multidimensional, and some resemble toys rather than instruments in their function.

The holes by which the hand enters are shaped by definitive and different shapes that afford certain movements, some holes only allow the fingers to enter, while others might allow a small hand to enter and not a large hand. The work also explores how modularity of an instrument impacts the sounding composition, the instrument has the ability to take on several different shapes and arrangements, and can therefore change not only the way it feels and how the sounds are reached but also how the sounding piece is arranged. The piece can be performed by one musician or many musicians and separated, the modular arrangement of the composition can be a quintet since it consists of five pieces, where the boxes can be arranged into familiar shapes for example the bed, or into a totem.

Thus sculptural and choreographically elements and thinking are included in the playing and arranging the playing of the instrument and its touch. This piece is the most comprehensive in terms of categories, it explicitly uses traditional musical materials, such as strings and piano keyboard mechanisms, but introduces other material such as marble, to change what musical materials are touched and how they are touched, for example by exposing the keyboard mechanism and turning it sideways leaving out the keys and the strings and retaining the hammers and the hammer mechanism. This combination of modifying and building and with a process of sonic exploration while in the building process leads the hands to start thinking haptically about sound in a way that strikes at the problem of what it means to have a priori knowledge of touch.

I am sure there are some.