In Sonic Independence I have created a process by which I am interrogating the question of how touch reaches what it cannot grasp? In musical terms, being able to finger smaller and faster intervals fueled the virtuosic need, because whatever is small is always more difficult to refine when making by hand. This virtuosity has always been about the hand, even Aristotle separated humans from other beings by their virtuosic touch and parts of Sonic Independence are about interpreting things at a scale where the human hand is no longer useful.1

During the phases of the process so far the question has been recast as what does touch sound like? By asking plants to play music it formulates the notion of the instance of music from a non-human perspective, thus I argue it solves the problem inherent in the extension of touch by instruments, or what Wark calls the in-human.[1]

Stephen Davies also uses the notion of organised sound as the basis of his definition of music. Rather than defining only what music is he defines the conditions from which it emerges in the world:

there are at least three ways music, as an abstract art form, establishes a connection with life as such. These are: (1) Music expresses emotion; (2) Music presents patterns and forms in sound; (3) Music involves the dynamic movement of sound in time and ‘aural space.’ […] Also, music is perceived in terms of gestalt and forms rather then as mere successions and aggregations of notes; […] And music, through the interaction of meter, pulse, and rhythm, is highly evocative of a coordinated, physical response in bodily movement, so that music encourages the control and regulation of motor responses.34

From this perspective I argue that music, if played by trees and plants is exscribing. Facilitating the plants with instruments that use touch to communicate gives them the possibility of a musical instance, for plants communicate through touches. This strongly problematizes the ontological and phenomenological notions of music, and it is this instance that the work process is after.

​Like many of my more conceptual pieces I started working on Sonic Independence​ with drawing. Two main ideas emerged from this research, the first was an instrument that is wholly for the plant, it is unhuman, non-graspable, and utterly plant kind. The second was the taming of plants, this problematic line of thought emerged to me from forestry. Here plants are seen like cattle or wine and wheat harvests. The aesthetics is also present in bonzai where even violent actions are performed on the tree in order to shape it to the will of man. 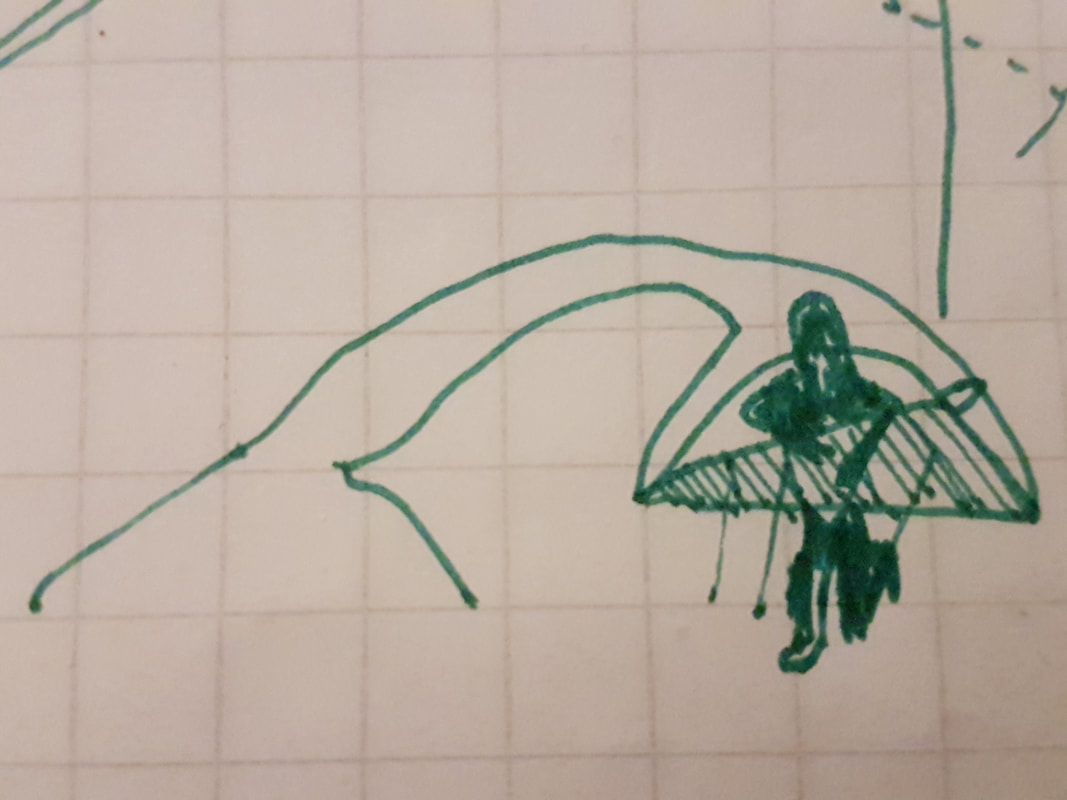 The second shape, of a tree-harp is modeled after a tree that grows next to the forest I have planted and which have started growing from seed-fall. 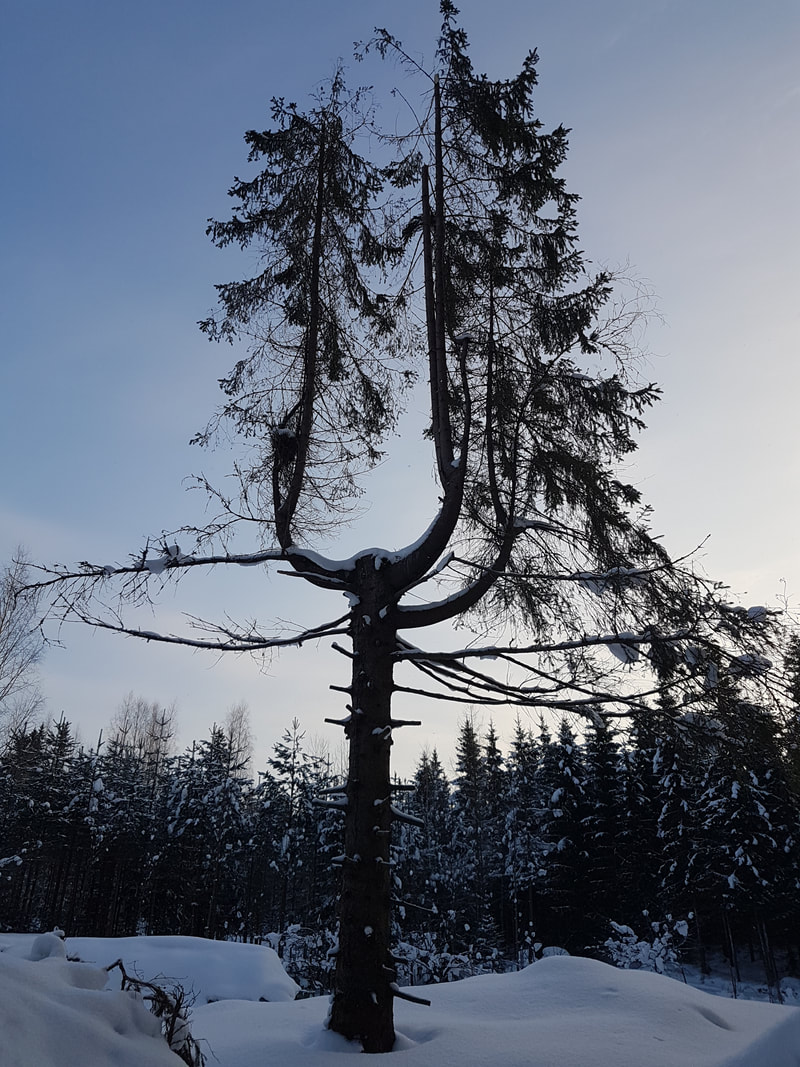 Researching the communication and movement of trees it becomes evident that trees are not only air beings like humans, but are earth beings as well. I deducted from this research that the instruments made for plants, unlike the first drawing I had made, should be equally underground as they should be over it. Materially thinking I am drawn to wood, which brings a symbolic question into play about the body of wood, but also to porous materials like tufa, more earthy materials such as unburnt clay and soil. Metal pieces, while having an obvious advantage in terms of amplitude of possible sound production are nevertheless problematic from the point of view of hunting, and even if unwillingly, metal strings housed like this in the forest makes me think about animal traps.
As well as including parts in the instruments that would be underground I feel that they instruments should adapt to the size of the plants as they can vary at an immense scale. In order to understand the scale difference I worked with photography to see the minuscule detail what the plants look like and how they touch themselves and each other in their environment. The scale of instruments recasts the questions I have been asking into an environmental problem: what happens when an object is visible but its parts are too small to touch, and what happens when the instrument is larger than the body can reach while sitting? The second clause of the question is interrogated in my Twang & Twang II.
​This implies that the instruments must be able to grow to accommodate for the moving and growing and enlargement of the plant in time. From this perspective the work critiques works that utilize plants in studying and building on decay and their implications in supporting a false sustainable economy.

Moving the work from the paper design to the plant required other modifications which were much more practical in their concern. The large harp tree was almost completely hollow and were forced to fill it with sticks to make it stable for further use. We also decided that the platform I wanted to build for playing should have a handle for balance and the final shape took its course. 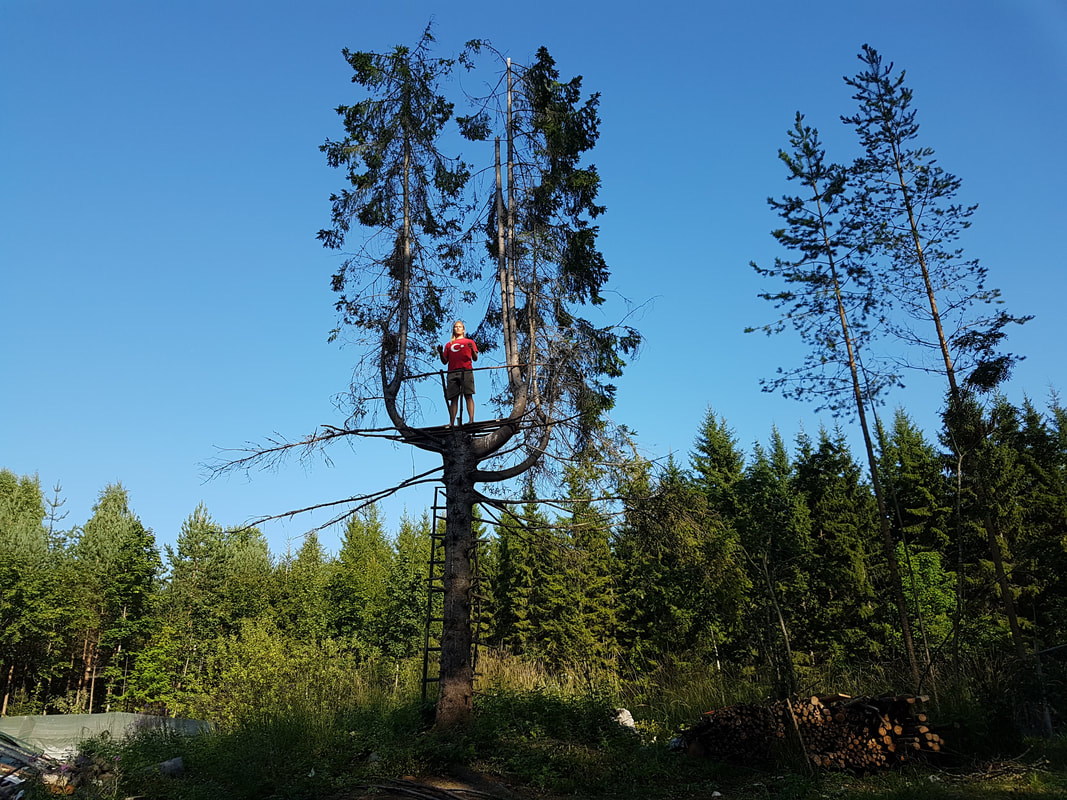 This work was presented in the exhibition CrossSections curated by Basak Senova in Kunsthalle Exnergasse WUK, Vienna.
I have the same feeling with Sonic Independence as I do with Trafficking Values, a work I made outside of my academic research context, but still related to the research. That if I am to talk of nature or trees to be specific, I need to be involved with them. In traffic this means to be in traffic, with trees it seems to mean to be in trees, and as well as exploring how the trees feel I thought of how the trees could feel me better. Continuing with the documenting of details that could remain invisible to the eye I started filming my interactions with the plants, and below are images from these interactions.
The same questions were re-examined almost a year later again in Kunsthalle Exnergasse WUK at CrossSections where I wanted to draw more on Davies notion of instrumental experience. Davies text discusses the intimacy of being and living with instruments rather than merely what they sound like or how they are used in performance. Davies argues that this reaction to instrument destruction arises ‘like our reaction to human injury precisely because we see the musical instrument as extending the musician’s body and inner life’.22

​This special relationship to instruments is also present in the relationship we have with plants. In the exhibition I wanted to discuss this through a reference to James Baldwin's Go Tell It On A Mountain. I used a quote which begins: "And he fell against a tree, sinking to the ground and clutching the roots of the tree. He had shouted into silence and only silence answered--and yet, when he cried his cry had caused a ringing to the outermost limits of the earth" 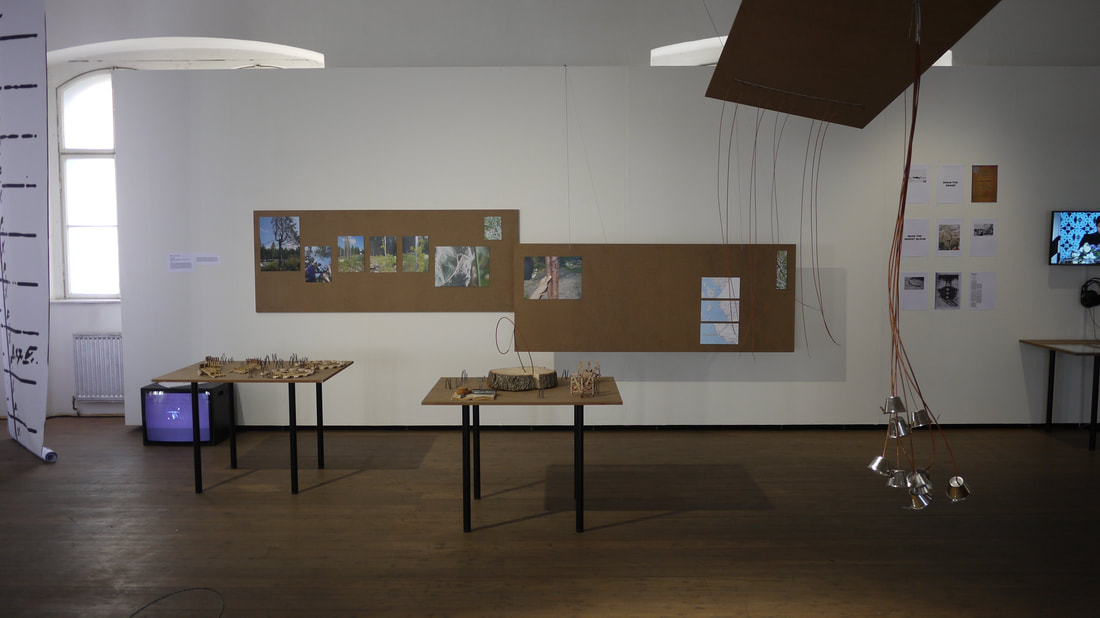 This piece interrogates how touch, taste, and sound are related, and further investigates how touch and its use as an aesthetic driver can be used to design instruments that mediate plant-human relationships, and what is relationship of our touch to nature and non-human agency. The instructions of this particular part of the composition asks for the musician to feel the insides of their mouths with a plant, or in other words, to place their mouths over the tip of a plant and thus listen in on the taste that emerges from how the plant touches the moist interior of the mouth, as well as feel it, and to listen through their skin and skull for the sounds the contact makes. Building and making are thought of from the point of view of how plants touch, what are their haptics, and what does their touch sound like? Playing and learning instruments are thought of from the point that perhaps there already is a sound in our environment that is made by plants and we have yet to discover it. Modifying instruments becomes timely and observable as an action done to acoustic instruments by plants as they move and change, play and build their environment throughout their lives. The plants environment is then the instrument, where in collaboration many plants can play. This makes the piece have a deep relationship with time since the touching is seen to happen at the pace of a trees lifespan, this ordering of touch by something else, in a time that is inhuman, and in a space which is not completely built or developed but grows. This demonstrates how different aspects of letting go can emerge in the act of touch driven aesthetics.