​pickhammeraxe explores de-habituation of touch from a musical perspective and asks what touch sounds like and what is touch's musical structure?

Peter Kivy argues that tablature does not contain the music because it does not provide a full picture with which the mind can comprehend the music as mental sounds, he says:

A set of parts alone cannot give a picture of the whole, as can a score. A tablature is, indeed, a kind of score, for, unlike a part, it contains the whole composition. But it does not contain the music as a visible structure that eye and mind can translate into “mental sounds.” It is merely a recipe – instructions for the fingers – which, if properly followed, will result in a performance of the work.10

In pickhammeraxe two of my lines of research combine, the line which I have followed in translating notation into pieces and parts, separating these parameters into the body of senses, and then working specifically with touch and the parameters available to it, and the formalization of the structure of touch as an organizational principle in music. I argue this is especially audible in the Kokkola recordings.

Being in touch with the inter-expression between attention to touch and attention in touch brings about the possibility to dehabituate touch in at least two ways. The first is mimicry, where familiar instruments are turned unfamiliar by replicating them. It is possible to use materials that are not used in those instruments to make visual replica which nevertheless feels and sounds different. My Violino-Piccolo does this by constructing several different replicas of the ¼ violin. The shape is replicated as exactly as possible while the materials in each replica are different: cardboard, paper, and solid wood. When looked at and when held, the form and weight of the instrument can feel exactly right, but when played the touch and the sound that emerge are not. This practice aims to ‘transform the utilitarian relation we tend to have with them (things) in an unfamiliar encounter, where materials, shapes, temperature, size, weight will enter in a dialogue with you.’11

The score of pickhammeraxe consists of illustrated inventions depicting wearable musical instruments, or glove instruments, which the musician is asked to recreate, in other words they perform the making of the instrument and the wearing of the instrument. Here touch doesn't just signify a fashion statement, it goes beyond pop references and even prosthetics to the technological extending of the sense of touch in the act of living vis a vis an instrument.

1 Nikolaus Gansterer, Emma Cocker, and Mariella Greil Choreo-Graphic Figures: Deviations from the Line (Berlin: De Gruyter, 2017), pp. 140.
​From the score shown above I chose one as mine number 13/20 and drew it out much larger and on larger paper also re-imagining the parts of the instrument through my material approach. In order to guide this process I bought a Mulberry branded blue fake leather hand-bag and dismantled it intact. This way I learnt the two different stitching methods and their application on seven different seams types. The material, its previous function and the marks left by that construction process therefore afforded my design.
Studies of the stitchings.
​Images from the process of dismantling the hand-bag.
​In order to create a context by which the audience could understood the de-habituate process which the work was interrogating I began copied illustrations from an art history book. What interested me especially were images of musiking with flutes, but also there were other types of touches, like the fresco of a hand touching the first black burnt piece of stone ash falling before the disaster. Or the Egyptian ceremonial hand holding what looks like a decorated glass-bead shaker in the shape of a hand-bag. 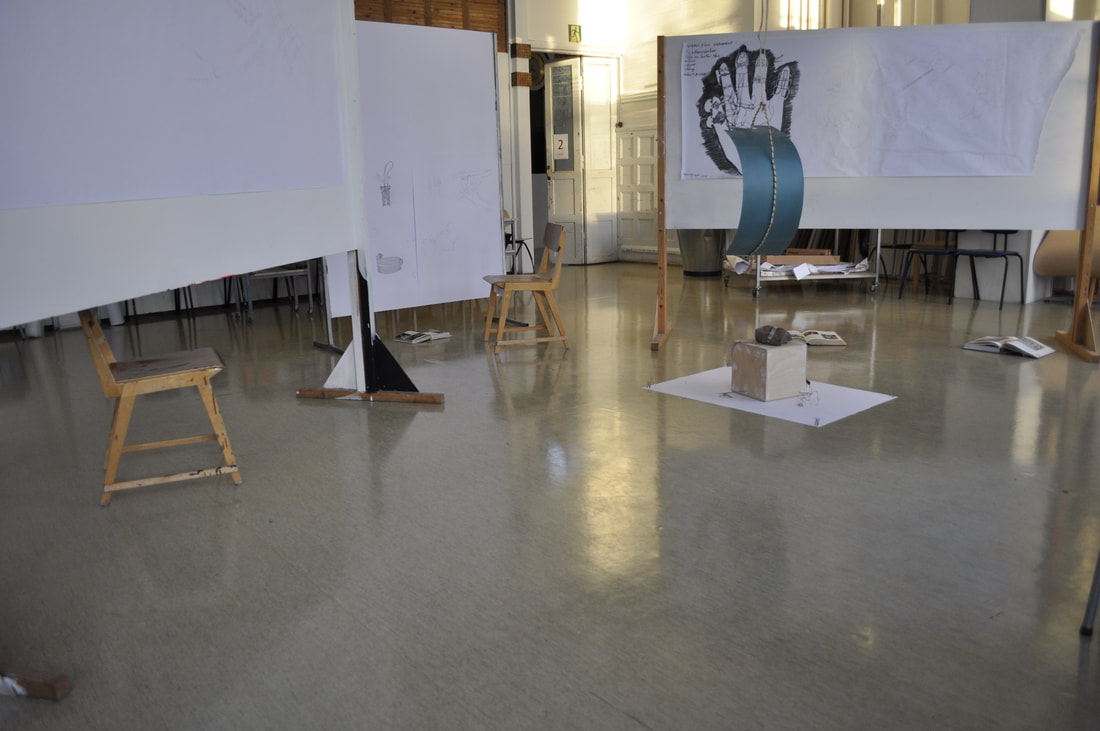 The composed musical instrument I made are made up of four pieces which interrelate the hands so that three are played by the left hand and one by the right.

​The piece interrogates touch when it is extended by objects, and when touch is transferred by a mediator.
It interrogates what happens when the skin feels through another object and understands how the resulting music is characterized differently when contact between the hand and the musical instrument is interrupted by another instrument. It would seem intuitive that touch in this sense is reduced, but rather is increased because the held object becomes the touched, and through it more touch happens.[1] As well as mediating the relationship the new instrument that is designed in a way that brings out what is between the skin and the sounding object: stretching, weight, tickle, rubbing, pricking, access of skin to sounding object, feeling of materials.

The action of the musician also demonstrates what I argue throughout my thesis to be the structure of touch as it acts and plays in and with the parameters of musical composition. In this way musical instruments become not just emitters of sounds, but accumulators of the sound of making, building, playing, observing, and admiring as formalistic and structural elements in the music. The music I have composed therefore doesn't extend touch, but includes it in music's definition.

What is reduced is the speed of touch, as not all the sensations of touch pass from the sounding material through the object to the hand immediately, the object must first take on properties that can be transferred, such as temperature, and only then can the touching hand feel them. This relation can only be understood by remembering what the sounding material feels like.[2] But also by observing the change that happens over time to the mediating instrument. This relationship in memory and time is physical in two ways, in that it happens on the skin and the skin itself can remember, but also because their representation coincides in the brain area that deals with three dimensional thinking.

[1]Texture is a good example. The texture of a bow, for example, becomes the felt objects, its particulars form the feeling
when touched, but added to it there will be the texture that which is touched by it
[2]Alex Honnold talks about this as a strong form of visualization in his TED talk:
https://www.ted.com/talks/alex_honnold_how_i_climbed_a_3_000_foot_vertical_cliff_without_ropes/
[3]Zubin Kanga’s program in HCMF concert “Wikipiano” features the use of a wearable magnetic glove.