Heel is the first piece in my body of work Mixed Signals. This piece interrogates the questions of what does it mean to touch a score and how does the musical experience change when a score can only be studied by touch?

Music description tends to focus on the sounding result. These descriptions often rely on the underlying presence of touch to indicate and represent the way the body touches the instrument, but the descriptions themselves aim at describing the sound produced rather then what the instrument feels like when touched. This can be be seen in the next example in the way pressing the fingers is described and how this indicates where to touch:
​
The glissandi are present in the form of bow position on the cello neck. This positioning is constantly behind the fingers, […] The performer is asked to work through the piece whilst maintaining a bow pressure that is consistently just below the level required to create pitch. The only pitches that the performer should allow to sound are the natural harmonics indicated by the numbers in circles (left hand nodal point) on the string indicated by the numeral. These pitches should be allowed to sound until they collapse, or until the right hand is asked to play ordinario, indicating that the performer should slowly move across all four strings from IV–I, I–IV etc.1

​In order to question the ways description of music for musicians tend towards sounding description I chose to notate my music first as tactile notation. The result recast my question to the problem of how does one (not just musicians) know they are touching a score, and once they know how can I compose a musical instance in this tactile tabulature?

Heel as a piece of performed music is a collaboration between myself and Susanne Fröhlich and Thomas Knoll. While I worked exclusively with Susanne in the process of composing the piece, I find that Thomas was able to internalize the aim of the composition in his interpretation through the provided notation and his collaboration with Susanne.

My initial research during the practice sessions with Susanne were relational rather than material or symbolic. In this way the research is very practical. I wanted to study what it looks like to touch touch an instrument and how and what did that communicate in order to start preparing to lay a foundation that would eventually solve my first major problem in presenting works that required touch to be experienced. I did this by filming and photographing our practice sessions. Secondly, in my preliminary research on touch I had found that music notation indexes touch in general, and more particularly articulation indexes how sound is moved by touch. This pointed my research towards an active touching as a starting point of what it meant to touch a score, and I defined this active touching as a touch that was produced while playing.

In other words, my aim was to try and make a score that could be played prima tatto, rather than first have the musician touch a score and then play the music, nor have the musician touch the score with one hand and play with the other. The first iteration of this score type I made by using braille to represent recorder fingerings and glue them on a stick that would then be attached to a recorder. This physical tabulature took into considerations the ergonomics of the instruments design by utilizing the fingers that do not normally play of an instrument with no mechanics. 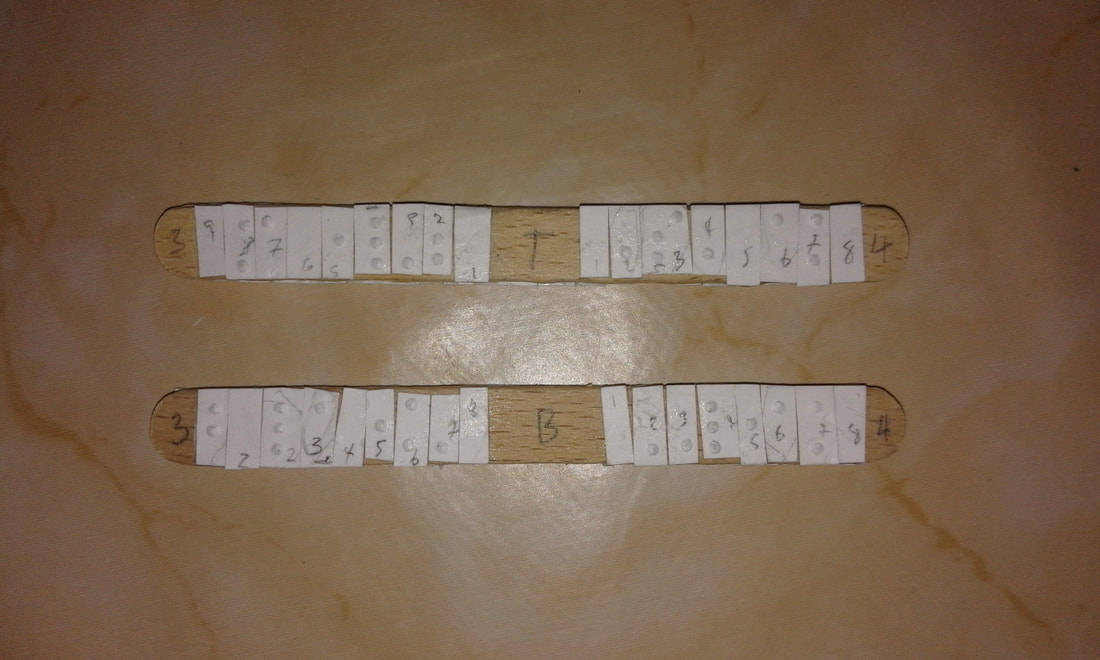 From this point of view the question can become about whether the instrument should be touched at all, or can it be manipulated at a distance, or grasping the instrument in a way so as to increase the amount of skin to instrument contact. The process of working towards Heel took this second road and we explored different ways to touch and hold the instrument which would increase skin contact. During this works I had an intuition that not only should the musician touch the instrument, but that in order to maximize the quantitative touching possible the composer should also touch the instrument.

This meant that what was normally out of reach for the musician was included through my touch and thus we discovered that if Susanne fingered all the keys of the paetzold, and I covered the bottom air hole almost completely the result was a soft sound that was somewhere between a timbre and a multiphonic in its complexity and that this sound could be produced only this way. We quickly saw that the same sound could be mapped out onto a single body by including the feet into the playing, and that this single sound, which responded and lived with even the slightest move of the heel over the hole, was so complex and interesting that by itself it could be the composition. 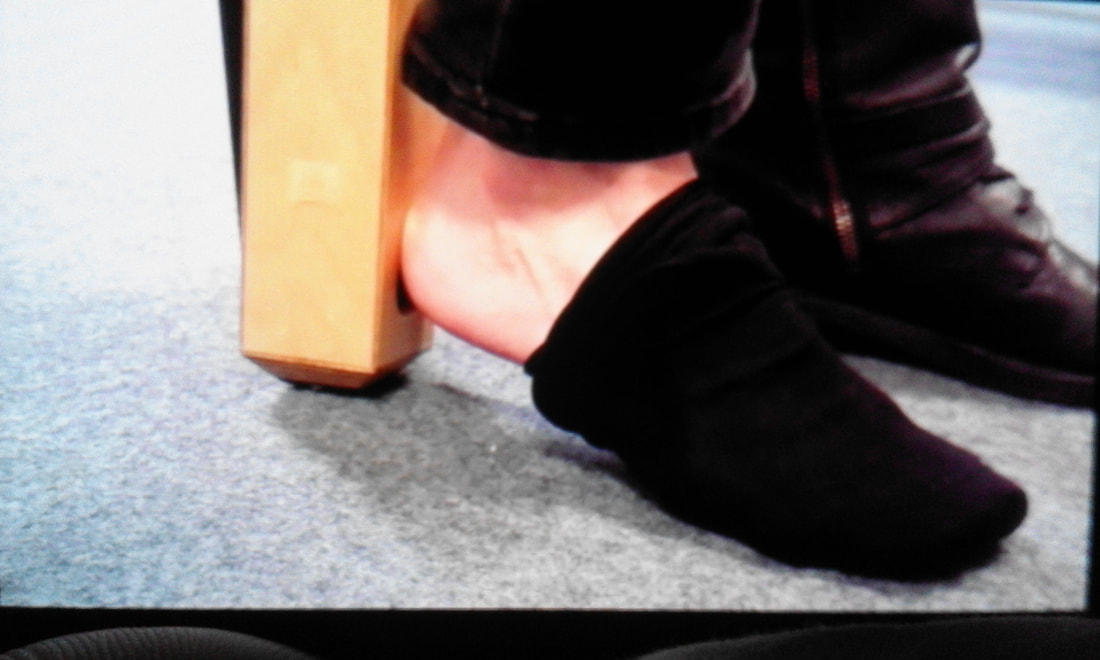 ​Thus starting with the idea of a moving action I ended up with a single static pose. While this is strictly not the case, the heel moves slightly as it feels for the hole it is heeling the question I had started with was recast as a notational problem. Jerrold Levison (1980) defines music as a sound structure and its performance means and I saw that the way in which touch had changed the instrument was to posit it as a pure sonic structure where the music is embodied into the shape of the materials and it was then the problem communicating this structure to the musician that I was next tasked with. 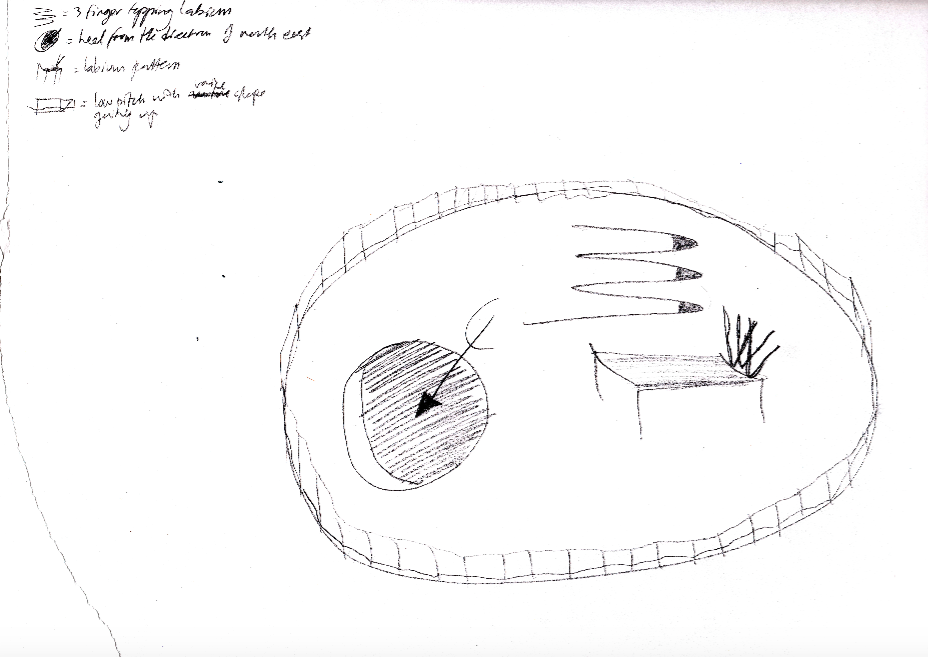 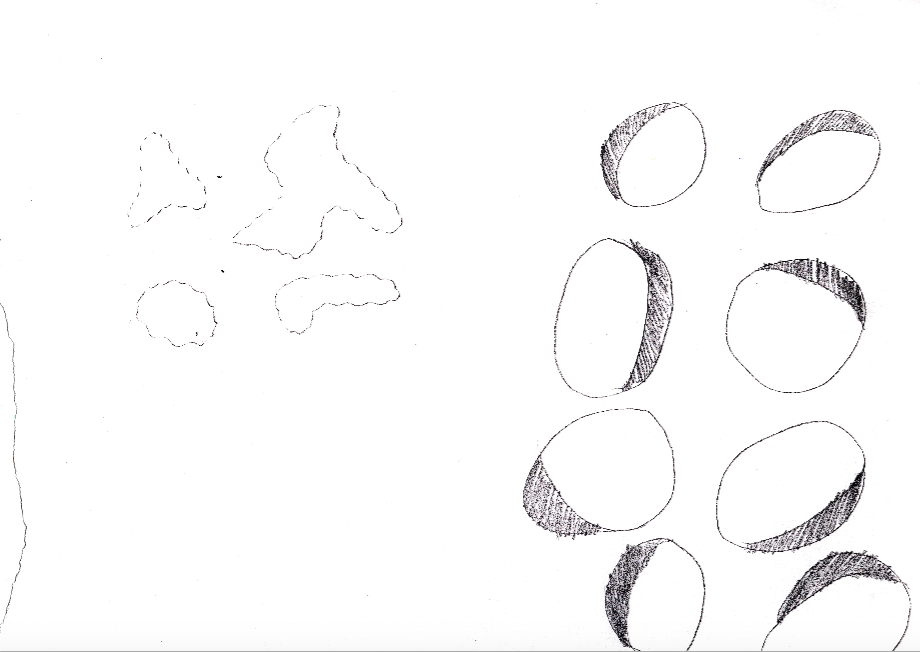 Thus I arrived at a triptych notation system where I would utilize many senses in order to communicate one sounding touch. But this triptych was not just a material collection of paper, metal and wood, I wanted it to communicate the symbolism of the heel as it exists in historical literature. 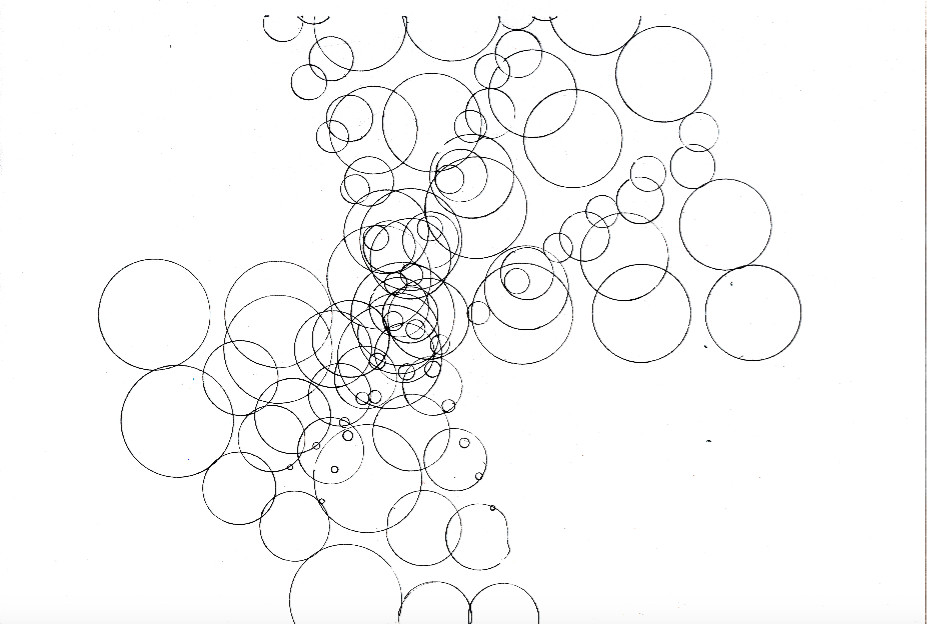 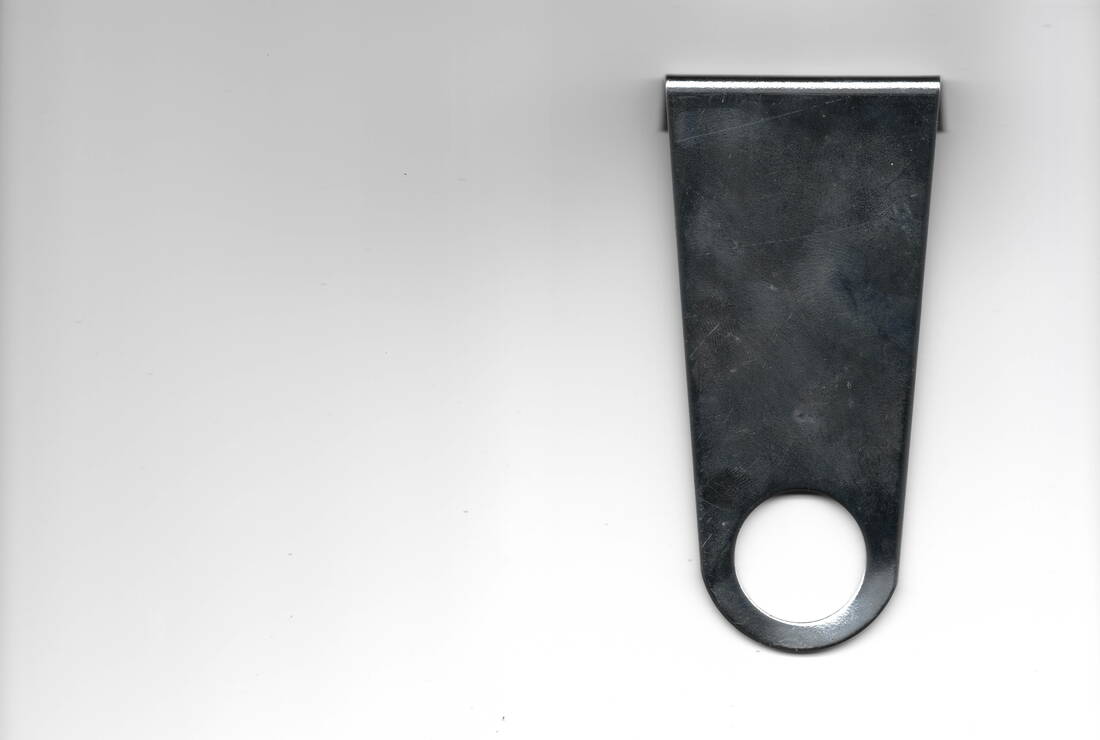 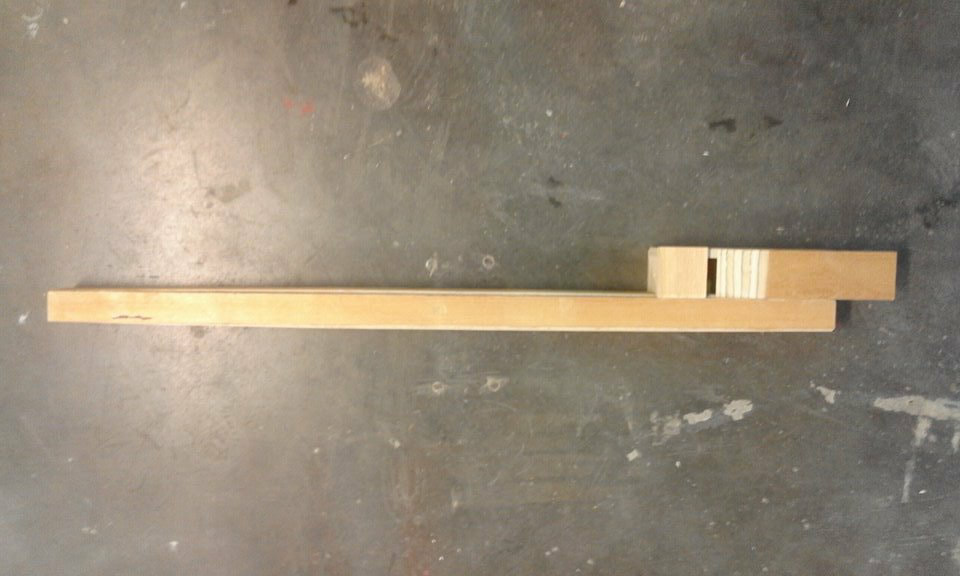 I wanted the paper to show the multiplicity and repetition of the contact point, for me it talks about its vulnerabilities and the moon crescent created by the contact of the heel and the hole and how in this void that results from the touch the sound exists. The metal on the other hand is cold and imitates the paetzold vis a bis the shoe horn, which is a tool specially made for the heel. With this I wanted to comment on the functional aspect of touching the heel and again critique the functional habits of touch. The last piece of notation is a 3/4 sized semi-replica of the paetzold made so that there is no hole for the heel but the sound hole is at the bottom of the leg making it possible for the foot to be free, and thus through its absence points the reader to the missing hole, while at the same time suggesting an improvement to the design of the instrument in order to fully harness to use the potential of Heel.
In the video we discuss from about 4 minutes onwards the constituents of the sound production. Susanne is drawn to the high overtone content of Bb, F#, and F. While, higher up in B the overtones can be heard as a dampening of the sound, in the softer register the overtones are extremely loud and completely hide the fundamental. There is a strong grittiness to the sound and yet the fullness of the tone draws the listener in to watch the touch of the musician.

This piece reveals the first inherent problems in the form of touch-communication between the composer and the musician which I am arguing for. My argument stands on the reason that the action which emerges from the collaborative praxis of touching a single instrument is good in the Aristotelian sense of praxis.

Heel interrogates the relationships between musical notation and touch by distinguishing between different forms of writing touch: a body of touch-writing. These forms are: writing about touch, figuring touch, and sculpting touch. Writing about touch means a description or tablature (in the sense that it is a mapping of an instruments topology) of where and what to touch. Figuring touch means describing the touch as figure, illustration or trace, drawing out how the touch looks like by drawing around the touch that cannot be seen when touch happens. Sculpting touch means using physical and tactile objects to demonstrate how the touch feels like when done correctly.

These different forms of writing nevertheless point to a single touch resulting in a single sound and I argue that these are the same instance. Jerrold Levison argues that music is a sounds structure and its performance means, as intended by the composers. He says, in order for works of music ‘to have the definite aesthetic qualities we take them to have, instrumentation must be considered inseparable from them’.2 Nevertheless, even when the performance-means are included in music, Levison does not clearly define if they are important in the aesthetics of music, nor does he explicitly talk about touch.

As a result the sounding music interrogates the style of music that emerges from a single touch and where that one sound, however complex its constituent parts are, can go as a drone. In this way Time and the ordering of notes becomes important because the sound of the piece reveals the relationship between touch and breath. Breath is an activity that has a temporal necessity even when the rest of the body is still.

The body of the wind instrument is arranged so as to afford the breath a certain shape. Sound emerges when air passes between a hole and the skin that covers it, touching and needing both. The relation that emerges from the interrogation of the sense of touch and blowing on the skin proved interesting for the recorder player because the mouth blows air which is warm, and when touching the instrument at the labia with the hand, where the sound is produced by air that is still warm, but when it travels the distance down of the paetzold to the foot where the sound of Heel is made, the air is cold.​